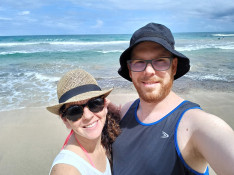 I never thought I'd find a member hotel that I would actually write about, but my simple overnight experience at The Lookout Inn Lodge in Carate changed my mind. The lodge is a series of open-air cabinas surrounded by jungle, all pressed against a near-cliff on a remote stretch of pristine jungle-backed black beach, each cabina adjoined by stairs and platforms to the main lodge. The entire lodge gives you the feeling it was hand-made from jungle findings, and gives you great visual access from the comfort of your cabina to the distant soothing sea and the nearby plethora of wildlife that makes the Lookout Inn one of their daily stops, if not home.

Terry and wife Katya have been there for ten years, and have put together something not too far removed from the Swiss Family Robinson homestead, if you don't include the elaborate solar system he has installed to heat the water, cook the three delicious meals per day, run his computer and illuminate low watt light bulbs.

Deep in the jungle, enjoy a refreshingly clean gravity-fed hot shower, I can't even remember if we had a key to our cabina, it wouldn't matter, so remote, only a smattering of guests joined us that afternoon after trekking through Corcovado National Park. The Lookout Inn certainly has more stairs than flat walkways. Not quite enough light was produced as I discovered that night, watching from the restaurant balcony overlooking the still jungle as the golden sun sank into it's pinky-orange reflection on distant waters where Francis Drake once sailed. My girlfriend and I dined on a wonderfully presented fresh fish dinner accompanied mostly by locally-grown jungle produce and some kind of multiple jungle juice and vodka concoctions. We arrived for dinner in the daylight and thus didn't have my flashlight by the time we got up to leave in the dark, and of course I fell and banged my chin, bloodied my shirt and hurt my feelings. The darkness, the white noise of the waves washing onto the shore, the stillness of the jungle under-riding the tension governed by the survival of the fittest, are all part of the amazing charm and uniqueness of the Lookout Inn at night.

In the day time, there's miles of endless deserted beach to explore and warm clear water to bath in, like you wonder why you bothered with clothes. Back at the Lookout Inn mid-morning we watched great scarlet macaws glide from tree branch to tree branch, one big old guy landing on a railing five feet from our head, then he walked behind my girlfriend and gave me, eye to eye, a loud dirty squawk telling me to stay away from her, who was now frightened but slightly proud. For entertainment, Terry has one wild macaw trained to do somersaults or play dead.

Meals are announced when Terry blows his conch shell. Katya sets out a exotic fruity buffet style breakfast but get there quick before the white faced monkeys beat you to it, seems like a never ending battle keeping them at bay. The more timid spider monkeys sit back in the trees playing and picking bugs off each other. You have hiking trails that take you unguided to nearby waterfalls, climb the 227 step Stairway to Heaven for an amazing overview of the area, check out the nearby frog ponds with poison dart frogs and at night take a flashlight down to the beach to look for sea turtles laying their eggs, or the youngsters escaping to the sea.

Later that morning Terry showed me some weird shaped giant foot prints sunk deep in the sand out front produced by a 450 pound tapir the night before. He has the grounds rigged up to sensor cameras that take flashes of the variety of wild cats and peccaries that roam his jungled garden paths at night. Then he emails them to former guests, 21st Century Swiss Family Robinson (or was that already a movie?).

But all this incredible beauty comes with a slight price, probably an eight (or more) hour drive from Adventure Inn, you could fly or take a $79 shuttle into Puerto Jimenez then take a taxi for $75, or there is a landing strip for small private aircraft. To learn more about The Lookout Inn or make your reservations, visit the Lookout Inn website.